In Episode Six, we took Dillon, our eight-year old English Springer Spaniel out on a narrowboat to see how he reacted to the canal environment.

Dillon's first time on a narrowboat, and he loved it!

It's taken Shaun and I many months to come up with a workable plan that will allow us to balance continuously cruising the UK canal network while making enough money to be able to survive. One of the most important considerations was whether our best friend, Dillon, would take to the water.

A big factor in whether Dillon would be happy living our new lifestyle is his chronic arthritis, which he suffers in his rear legs and hips. When you meet him for the first time, don't be fooled by his active, springer-like energy. Once the evening comes and it's time to settle down, he stiffens up like a wet t-shirt hanging out on a frosty morning.

Dillon's 'Please can I have a Custard Cream' expression.

We've looked at everything we can think of to cure or alleviate his symptoms. Physiotherapy, hydrotherapy, rest, light exercise, more rest, and the final option, medication. We're not keen on feeding him tablets because a; they don't really seem to make any difference to his comfort, and b; we hate to think what they're doing to his tummy!

After two or three years of trying different things, we've learned that regular light exercise keeps him mobile and happy, although a little stiff on an evening. He's happy and that's all that matters to us.

In May 2018 we took Dillon for his first trip on a narrowboat. We were nervous. He'd never been near a canal before! We'd bought him a very trendy life jacket (which he never wore), and hoped (prayed) that he wouldn't dive straight in for the nearest Mallard!

Like most things in life, it wasn't worth worrying about. He loved every minute of it! After the first half an hour of sniffing around, walking from bow to stern via every corner of the boat, twenty times, he settled down with us at the stern and took in the sights, sounds and smells of his new environment.

We chose the route from Tardebigge (Just after the top lock) through to Birmingham, then down the Stratford Canal as far as Hockley Heath before turning around and returning to Tardebigge. Mainly because there are no locks, so it wouldn't stress him too much (and we wouldn't be too distracted).

Safe to say, the short break was a success. The weather was tropical, and we had the best May Bank Holiday ever.

Watch the full vlog, and subscribe to see future videos for free! 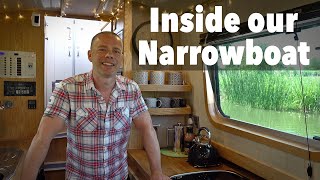 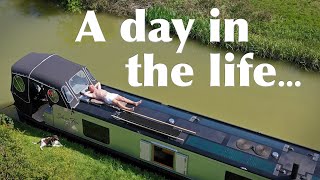 A Day In The Life of a Narrowboat Liveaboard During Lockdown